Good: the Battle is a miniatures based combat skirmish game, in which you take the role of a character or characters and attempt to defeat your opponents by doing good and inflicting bad upon them. The core game, designed by us at Project Good is the game of Good: the Battle. The uniqueness of Good: The Battle is it’s ability to use any genre, any miniatures, anywhere, anything else…? Yes there is, but it’s all Good…

Unlike the heavily stat-based games that you see everywhere nowadays, Good: the battle turns these statistics  into two basic attributes; Good and bad. Obviously the better you are at things (shooting, close combat, healing, etc.) the longer you will survive in this world, but everyone has a limit of how much Good they can do. Nasty things like damage, curses, etc can only be described as Bad things, but sometimes a bit of bad is exactly what is needed.

There are thousands, probably hundreds of thousands, of character miniature manufacturers out there; and every single one of these can be used in Good: the Battle – regardless of scale*, setting, period, race, etc. Good: the Battle uses the actual miniature to give you benefits in the game. For example; a miniature equipped with swords will be better in close combat, than somebody with none. A miniature carrying a rocket launcher will obviously do more damage if it shoots you in the head. Huge dragons will have more hit points, and mice will have less. But this doesn’t mean a one-armed dwarf mute who’s only weapon is a bag full of dead hamsters won’t be able to put up a fight…

The games system uses specifically designed character record sheets and counters to make playing the game a breeze. The sheer amount of powers and special abilities that can be given to your characters makes almost endless possibilities and combos. Powers like: Replication – because two smaller versions 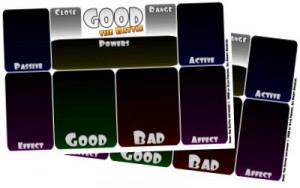 of yourself can do about the same amount of good but in half the time and Desolation – for removing those unsightly features in the landscape that are ruining a good view. There’s a whole heap of abilities included in the main game, with expansions coming out to give even more possibilities!

Don’t forget to check out the reviews listed on the side menu. 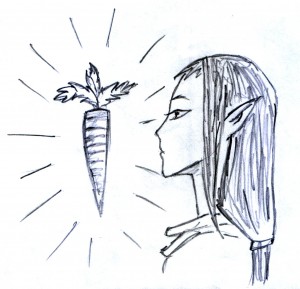